Kristina Novak played at the ITF U18 G2 tournament in Villach, Austria. In the Singles Competition she lost in the second round against Lara Schmidt with the result 36, 76, 36 after four hours of play.
In Doubles Competition Kristina played again with Slovakian Lenka Stara and won the tournament. In the finals they won with 63, 64 against French/Japanese pair Mylene HALEMAI / Himare SATO.

This is for Kristina already the seventh victory in the ITF Doubles tournaments. She has three victories in tournaments of 2nd grade and four in the tournaments of the 4th grade. Since the Junior Competition rankings calculate also one quarter of the points in the Doubles competition to the Singles rankings, a new victory is very important for Kristina. She will be ranked for the first time in her career at the 174th place. 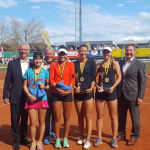 Kristina Novak took part at the International tournament in Italy (Salsamaggiore)In the Singles tournament she lost 2/6 1/6 in the second round against Lisa PICCINETTI.
In the Doubles tournament Kristina played with Belgian player Axana Mareen and won the tournament. In the finals they defeated the Italian pair Rocca / PICCINETTI with 6/3, 6/3. 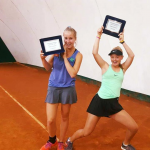